Tintern Abbey’s brief existence as a band is pretty much a full-house at Psychedelic bingo – a revolving door of band members; conflicts due to ill-matched drug intakes; lost recordings and significant interest long after they split up. Grapefruit Records release of the band’s complete recordings is all the more remarkable as they released just one single – the much-travelled ‘Beeside’, which has found a home on many a psych compilation. What has been excavated is a fascinating glimpse at a musical what-might-have-been, songs which vary from astonishing to ditch-water dull but slipped into obscurity when even the band couldn’t have cared less what happened.

Comprising David MacTavish on lead vocals; Stuart Mackay on bass; Don Smith on lead guitar and John Dalton on drums, Tintern Abbey were formed in early 1967 and following their congregating in London, were taken under the wing of Nigel Samuel, the wealthy offspring of property developer, Howard Samuel. Samuel junior was not adverse to investing in unlikely projects: he bankrolled counter-culture bible The International Times; supported London-based black revolutionary and pimp (and eventually hanged murderer) Michael X and also invested in another band, The Deviants, who would enjoy rather more media attention than Tintern Abbey. 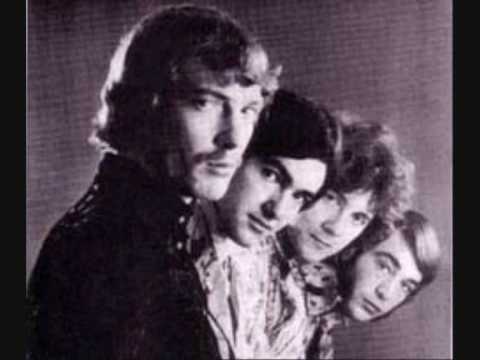 Something both bands had in common were a lead singer (Mick Farren, in The Deviants’ case) who was rooted in the written word. In MacTavish’s case, it was largely poetry, indeed his band’s name is a direct take from the Wordsworth poem of the same name, something which says much. Like Page and Plant ensconced in Bron-Yr-Aur, Tintern Abbey were shuttled to Cornwell where they were encouraged to write their magnum opus in seclusion, with the added bonus of inspirational, stunning views. Their attempts were interrupted by the local constabulary, suspicious that a bunch of hippies should not only be holed up in a very presentable cottage but also had some top of the range equipment. Though this proved nothing more than time-wasting, the police were not without reason to take an interest. The band’s drug intake was significant – for the majority, this was bag after bag of marijuana; for guitarist Don, it was something rather stronger, and his intake of amphetamines would ultimately prove to be the crowbar that eased them apart.

Armed with a living stage prop they picked up from Cornwall – a honey buzzard named Thor with a propensity for regurgitating food on the audience – the band entered the studio in London and recorded their first single for Deram, ‘Beeside’ backed with ‘Vacuum Cleaner’. Both tracks were full-on psych – inside-out drums, yawning guitar, dizzying mellotron and some lyrics which have not passed into musical lore. As the single found its way into bargain bins in record time, Don quit, his lack of enthusiasm and sporadic waking hours finally taking their toll. The band quickly sought a replacement – upstart David Gilmour (yes, that one) was rejected and they settled on Paul Brett, who had spent time playing with Arthur Brown amongst others. He too was ultimately replaced by Colin Forster.

Acetates for both sides of the single are presented in this set, the alternate version of ‘Vacuum Cleaner’ really highlighting the rather Moon-esque drums and an even more shimmering guitar break. As well as a disinterested singles-buying public, they were also met with distaste by some quarters of the music press, with John Peel highlighting their near omnipresence in the inkies as being entirely due to their connections in high places rather than their musical prowess. A little unfair but you can see the point he’s making. The change of guitarist coincided with a delay in releasing a second single, widely expected to be ‘Snowman’, a terrific track, absolutely drenched in hallucinogens and imagery of armies of carrot-nosed chaps going forth towards the sun. The stalling was enough for the label to get appropriately cold feet, though Record Mirror went as far as trailing the next track as ‘How Do I Feel Today?’ a comparatively underwhelming track with a far more stripped-down feel and though album-worthy, never likely to capture the mainstream imagination. Things got so bad that even Thor the buzzard made a run for it, flying out of the front room window of MacTavish’s home, possibly squawking “musical differences”.

A change in booking agent meant that even the gigs were starting to dry up and whilst Nigel Samuel was still happy to wheel the band out like a puppy dog when the fancy took him, Deram were less than impressed and though there was chatter of an album release in August 1968, it never happened, the sizeable number of completed tracks and demos hung around their necks like a particularly colourful millstone. The two discs here allow you to pore over what never happened. The likes of ‘Tanya’ have an air of Crosby, Stills, Nash and Young, whilst ‘Stickleback’ is perfectly pastoral silliness, with “birds up in the sky who know that we will die”. “Hookah” sees them turning into Mamas and Papas, with a surprising degree of success but the material is inescapably patchy, especially the later recordings. ‘Blue Pants’ has novelty value and you can imagine it having a lease of life in the hands of a comedian or theatre performer but as a flexed musical muscle it’s got as little attraction as lyrics like “yo-ho-ho and a bottle of rum, would you believe I’ve got my son’s pants on?” would suggest.

“My Zoo” with the addition of a breathy organ and a superbly catchy melody promises much, as does an orgasmic, power-Kinks blast entitled ‘My House’ but it was to no avail. By February 1969, the band went their separate ways. The excellent liner notes to this set do not reveal that the members went onto great success with other bands – rather, that like countless others, they drifted off into other short-lived combos and then finally into ‘the real world’. A happy ending is provided by the welcome news that Thor was found out in the wild and was given a home in an aviary for the rest of his days.

What do you think?

Browse and manage your votes from your Member Profile Page

Unleash your creativity and share your blog/articles with us!

Sorry. No data so far.

Back to Top
Close Create

Your password reset link appears to be invalid or expired.

To use social login you have to agree with the storage and handling of your data by this website.